Are you jumping with excitement? I basically can’t stop staring at my new baby – the HP LaserJet M452DW ! It’s my first ever LASER printer, and is already WOW-ing me on the daily (as well as confusing me on the hourly). I have promised y’all some more information, and you know I love to share about new tools for stationery designers, so buckle up, there’s a lot of info coming at ya!

I had been considering this printer for a while, due to its white ink capabilities, which I’m very pumped about. The reason that made me finally move it out of my “Saved for Later” section, however, was actually something else – I was printing a large illustration on vellum on my Canon Pixma Pro 100 – an inkjet printer – and the ink took about 55 minutes to dry enough not to smear on each piece. So instead of pulling my hair out with the Pixma, I went ahead and pulled the trigger on the LaserJet, knowing that laser toner doesn’t even have the capability to smear.

So my four reasons for purchasing this printer were:

Initial Thoughts on The HP LaserJet

It’s been easy so far! I took it out of the box, and it’s ready to go. Wi-Fi setup was the easiest of any printer I’ve ever had. I have had to run several cleaning pages – more than I expected to – but those always clear up the issue. It’s also significantly faster than my Pixma, for instance I printed 150 of those vellum wraps in about 15-20 minutes. If you have the Pixma, you’ll know that that’s a miracle comparatively! 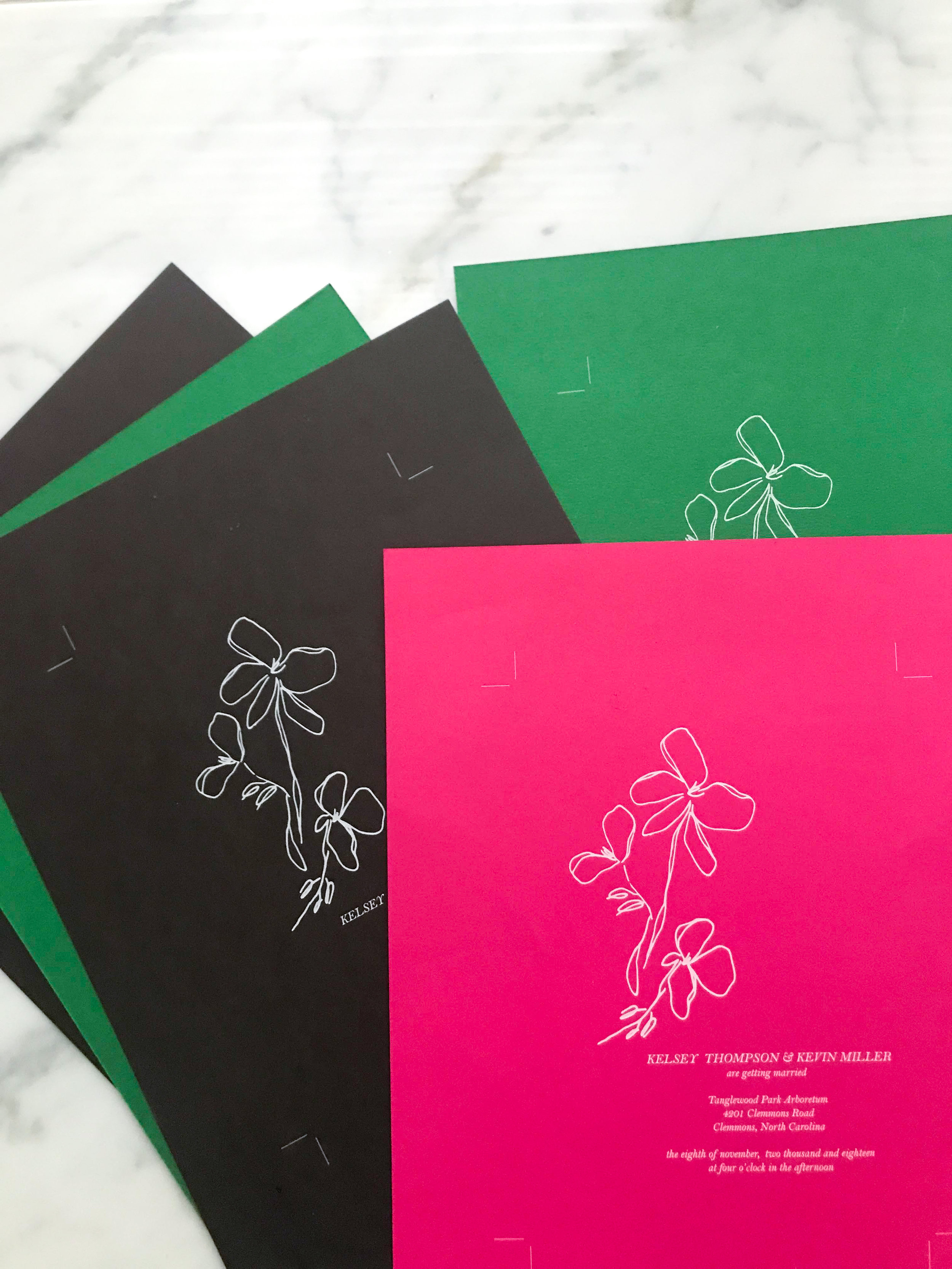 Okay, so I know you’re all here for the White Printing Tutorial! It turns out – it’s so easy. Most white printers cost somewhere in the $10k+ range, so this $279 baby is actually not a white printer, it’s a little workaround! You get a compatible laser printer (maybe this one I got, but there’s a whole host of others listed here), and you replace the black toner with a Ghost White toner cartridge whenever you want to print white instead. For the record, this is sold separately and is about $350! I bought this one here. So the total investment is about $600 for the white printing capability. Whatever you do, don’t touch the rollers while you’re switching it out, and keep whichever cartridge you aren’t using safe and secure in a dark place (or a box. I keep mine in a box).

You’ll then basically trick the printer into printing white, by printing in all Black, 100% K. So whatever design you want in white, make sure your color swatch says 100% K, and doesn’t have other colors in it. It’ll show up black on screen (which is good, because otherwise you couldn’t see it on a white background!).

When you go to your print settings, you’ll check the box that says “Print in Grayscale” which only allows the black cartridge to be used. So the printer will actually use the Ghost Toner, thinking that it’s black, and voila! You’ll be printing in white ink!

I tried several types of paper, and as expected, found out that the white shows up best on smoother paper. This pink is basically the smoothest paper on the market, and it worked the best. The black was slightly better than the green, which wasn’t quiiite as opaque as I’d hoped, but still lovely!

And of course, I tried envelopes! We’ll chat about those in a second…but know that the white ink was perfect on them as well.

Does it Print Envelopes?

This is another huge point! And the answer is yes – with caveats. It prints 4bars better than the Pixma (not hard to do, tbh!), and A7s as well (it prints other sizes, but that’s all I’ve tried). The caveat here is that you cannot print open-flap envelopes, so if you’re doing return addresses AND guest addresses, you have to run them twice. But like I mentioned, it’s about 826x faster than the Pixma so that’s not a huge deal. And I’ll repeat that part because it’s important – do not put open flap envelopes in a laser printer! The adhesive will ruin it (thanks Carley for telling me in time!). I put a giant note on it to remind alllll of us in the studio.

This printer specifically does have duplex printing features, but I haven’t figured out a simple way to make that work with my files (adding the return address on every other page for the entire file…) so I haven’t tested that feature with envelopes. Tips on that would be very welcome! Duplexing works great on paper though, and if you’re not into duplexing, there’s the same model without duplexing for about $30 less.

Another thing about envelopes is that with this printer, you have to run them only a couple at a time. And I’ve found that if you let the ones in the tray run without putting new ones in, that there are looooong pauses between each set of 3. So I have chosen to stand by it and feed new ones in with the natural printing rhythm. It’s a little tedious – but this is another place where the higher speed makes things not so bad.

Great. No caveats here. I don’t plan to do any/much high-color printing in-house, but I tested it to be sure and it came out pretty well – a little dark, but some simple adjustments wouldn’t be tough to make! As expected, the black and text quality is noticeably crisper than my other printer as well.

Sounds Too Good to Be True!

Well, of course there are some downsides to this printer as well:

It’s nice that this printer has a self-cleaning feature, but I definitely did not expect it to need that as much as it has so far. I have had to run a cleaning page pretty much every time I’ve turned it on after being off for a bit, and after switching the cartridges (although it says it cleans when you switch a cartridge, that hasn’t been my experience).

Like I mentioned, you can only fit about 3-4 envelopes in at a time. The feed tray for paper is great though!

The paper or envelopes always come out with a little curl on the sides. I have been flattening my pieces with a heavy book.

All laser printers use heat. It gets hot, the paper comes out hot. If that bothers you, then that could be an issue – it doesn’t bother me that much, honestly.

It says it’s jammed a little more often than other printers I’ve used. But then it turns out it’s not actually jammed, so you just have to move the paper around and then it’s fine. Like all printers, I think this one has PMS sometimes….

My number one gripe about this printer is that at this point my envelopes still have indentations on them from the other side of the envelope after running through. I have been informed that this will go away with time – but we’re not there yet. I have found the indentations are less if you put the paper setting on “light” paper, but in a few cases, that also seemed to make the toner go in multiple places on the envelope…not sure if this will be the case for ALL of my projects, but at this point, that’s where we’re at. I am going to test out a few settings, as well as running blank papers through a bunch of times, to see if that loosens things up, and I’ll update this post as soon as I have any additional info on this front!

Did you get rid of the Pixma?

At this point, I’m still using the Pixma for A7 envelope jobs, because I can run it through once, my files are easy to set up (since that’s what I’m used to) and there are no indentations. I also plan to keep the Pixma for handmade paper, although there are now a few places that print digitally on handmade paper – so I may start outsourcing that. Laser printers can’t print on handmade paper because the heat will burn it. The Pixma is a comfort printer at this point, but I could definitely see myself still using it for A7s and I like the idea of having it as a backup no matter what. It was a great starter printer, and it served me well, so I’m not thrilled to get rid of it!

Overall, the LaserJet has been a great addition to our printer fleet! I think the white printing is the part I’m most excited about, although if we can get envelope printing going a little better, that feature will definitely be used the most. Let us know what questions you have down below and I’d be happy to answer them for you!