What Should Go on Your Invitation Map?

Invitation maps are becoming so very popular and we’ve seen them all over the place lately! I don’t think that they are going to disappear in 2020 or anytime soon. So today we are chatting about what should go on your invitation map!

What is an Invitation Map?

First of all, what is an invitation map? A map is typically on a separate card from your invitation and it shows the area that you will be getting married in. This can vary from a couple streets or even one little block to an entire island or city – I’ve seen a lot of different varieties here.

The main thing is that it includes all the important points that your guests need to know. It’s important to remember that the map is a tool for your guets – it’s not just a beautiful piece, but it’s also functional when done correctly.

What Goes on an Invitation Map?

There’s not really a tried-and-true rule because this is a pretty new part of the invitation Suite, but we definitely recommend including where your ceremony and reception are going to be, as well as an any other events that are part of your actual wedding that every guest is going to be a part of. Those are the only really required pieces that go on the map, because that’s where people are going to need to get to for the celebration!

How to Design Your Wedding Map 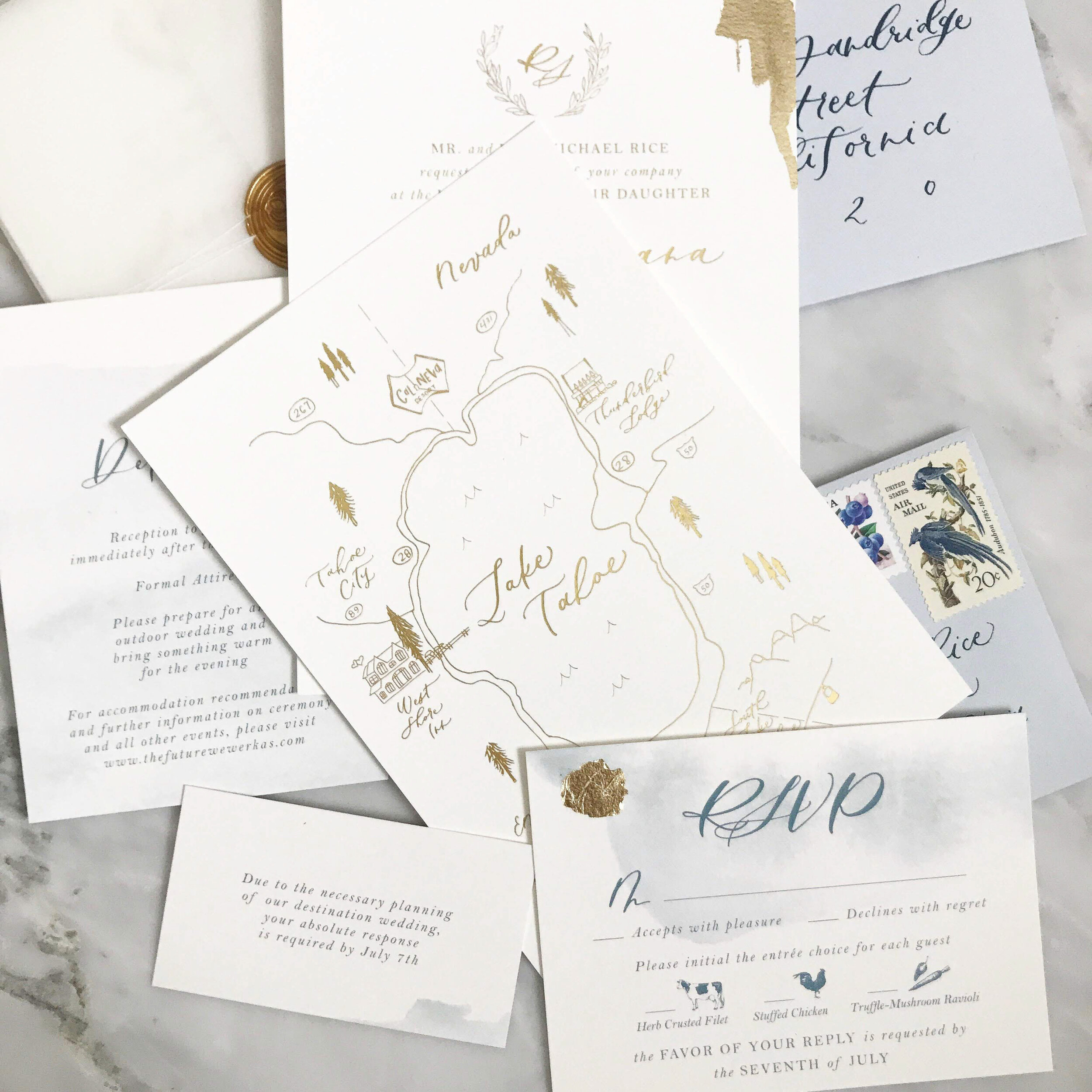 Really the sky is the limit here! …or should I say the Earth is the limit? We try to keep our maps to an area that kind of makes sense from a design perspective. So if you have one piece that you want to include on the map that’s really far away from the others, you might need to do a little zoom-in bubble or kind of fudge the actual geography involved in order to get all of those locations together. If you can nix any of the locations that are really far away in a certain direction that really helps.

You also should focus your map on being vertical or horizontal. If you had a lot of locations you want to include that are in the same general north-south frame that will make sense. But then if you have one that’s really far to the east or west that’s going to be more difficult and everything else is going to have to be smaller in order to accommodate for that. Whenever you can keep things in a more centralized geographical area, it helps the overall aesthetic and function of the map.

What Else Can I Include on my Invitation Map?

A lot of people include places that are important to them as a couple, so this could be your home, where you met, where you got engaged, etc. If all of those are in the same city or general area as your wedding, of course!

Another great idea is to provide tourist attractions or places in town that will be helpful for your guests – such as restaurants, places to shop, places of interest, museums, etc. Anything that really ties “The Experience” together for the gue. And of course another sts is fun!

Another important part of the map is to really ground it in your city or location. So if you are painting a map of New York, for instance, you might want to include the Statue of Liberty as an extra element or the Empire State Building or the Freedom Tower. You also definitely want to include the surrounding water areas because that’s a big part of New York. If your wedding is in the Caribbean you would potentially include some nautical elements – Caribbean florals, etc. – on the outside of your map.

As far as decoration goes you can really go in any direction that you want. We have done some maps that include cute little fish swimming in the water or I’ve seen some that include nautical Flags spelling out the couple’s name because the couple was really into sailing! So the sky is really the limit as long as you keep the locations that are included in your map pretty functional.

Is there a Limit to the Locations on Your Map? 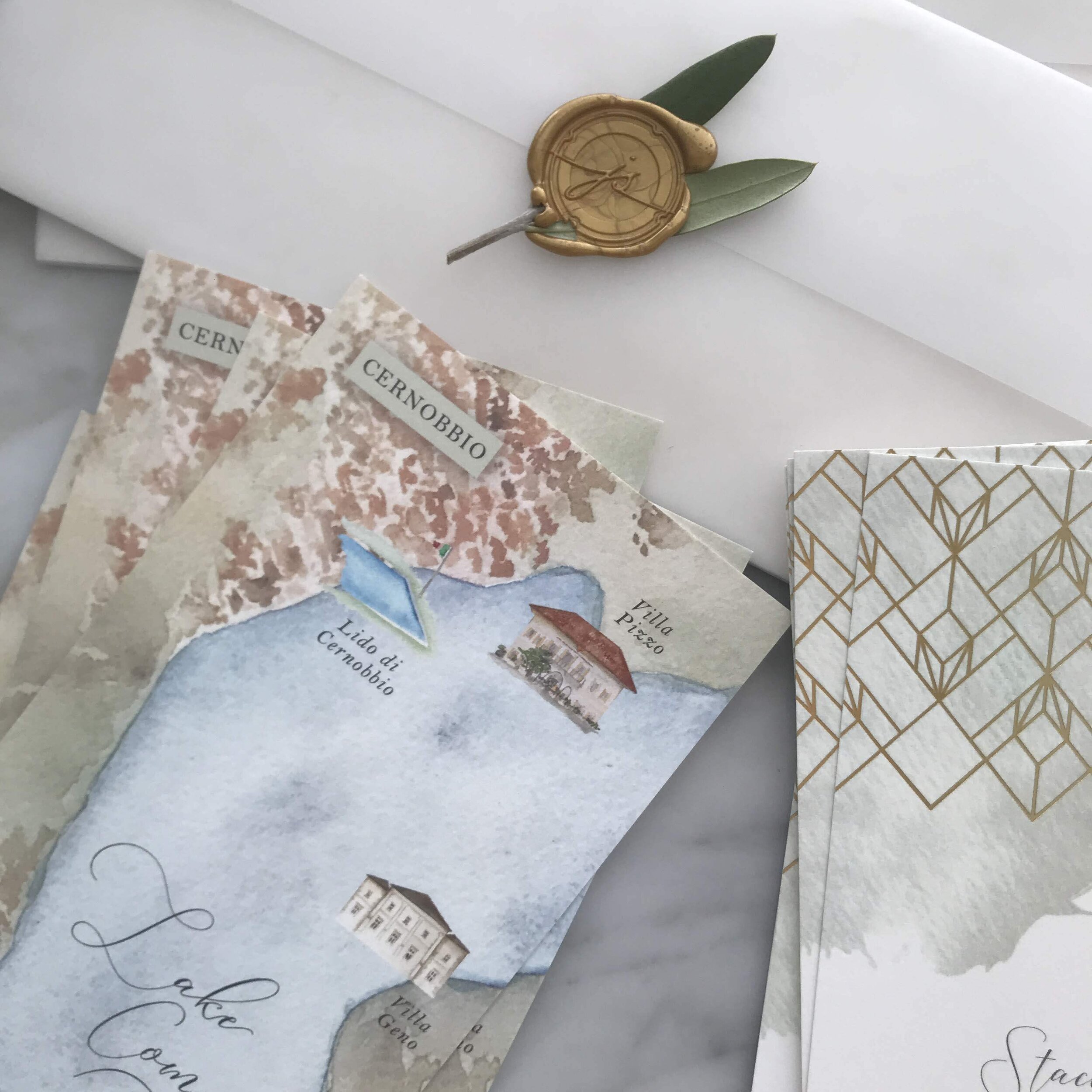 The answer is as always – it depends! If you are doing a full-blown, detailed watercolor of everything on the map, then it’s going to be more difficult to include more locations and it’s going to be more costly from your designer. If you aren’t including super-detailed images, and are going for a line drawing or even name + location only, then you’ll have the opportunity to include a lot more locations!

I recommend chatting with your designer because most of us do charge by location and can give you an estimate of what that will cost!

No matter where you’re getting married, you can always include a really fun interactive piece by including an invitation map! Another unique option is to include a map on your itinerary or welcome packet for all of your guests. If you’re interested in talking about an invitation map definitely fill out our custom invitation contact form here.