Alright, m’ladies and m’lords, Sers and Maesters, wildlings and Stone Men, let’s all gather round for some fun musings on our favorite Westerosi for next week’s Game of Thrones series finale! We’ve put together some invitation inspiration for some of our favorite characters on the show, so please let us know which one is your favorite by sharing and commenting below. I promise that Red Weddings only refer to color schemes, and no one will be letting Arya bake any of the cakes…..(too soon?!).

Official Spoiler Alert happening all the way up to Season 8 Episode 4 (the one after the battle of Winterfell) – do not click Read More if you don’t want spoilers!!!

Almost all of these images were sourced off of Pinterest, and those are all linked directly to the source link below the character’s mood board. Some images are from our own Design by Laney products, so feel free to Shop our Collections or fill out our Contact Form if you’re interested in any of them!

All right, ready for some Game of Thrones wedding inspiration?! Let’s do this…

Alright, ignoring the fact that she just said no to her first marriage proposal (I TOLD YOU THERE WERE SPOILERS), I am a huge #Gendrya shipper and would love for them to end up together if he can figure out how to ignore his new lordship and treat her like the amazing badass she is. I’d design Arya’s invitations with lots of androgynous elements, deep blues, blacks, and browns, with touches of leather and a fun play on ambiguous face and body silhouettes referencing her time with the Faceless Men. I think one of the most interesting things about Arya’s character is the internal battle between the good parts of her soul and the evil parts, so contrasting elements of black and white would be a way of representing that struggle in this suite. 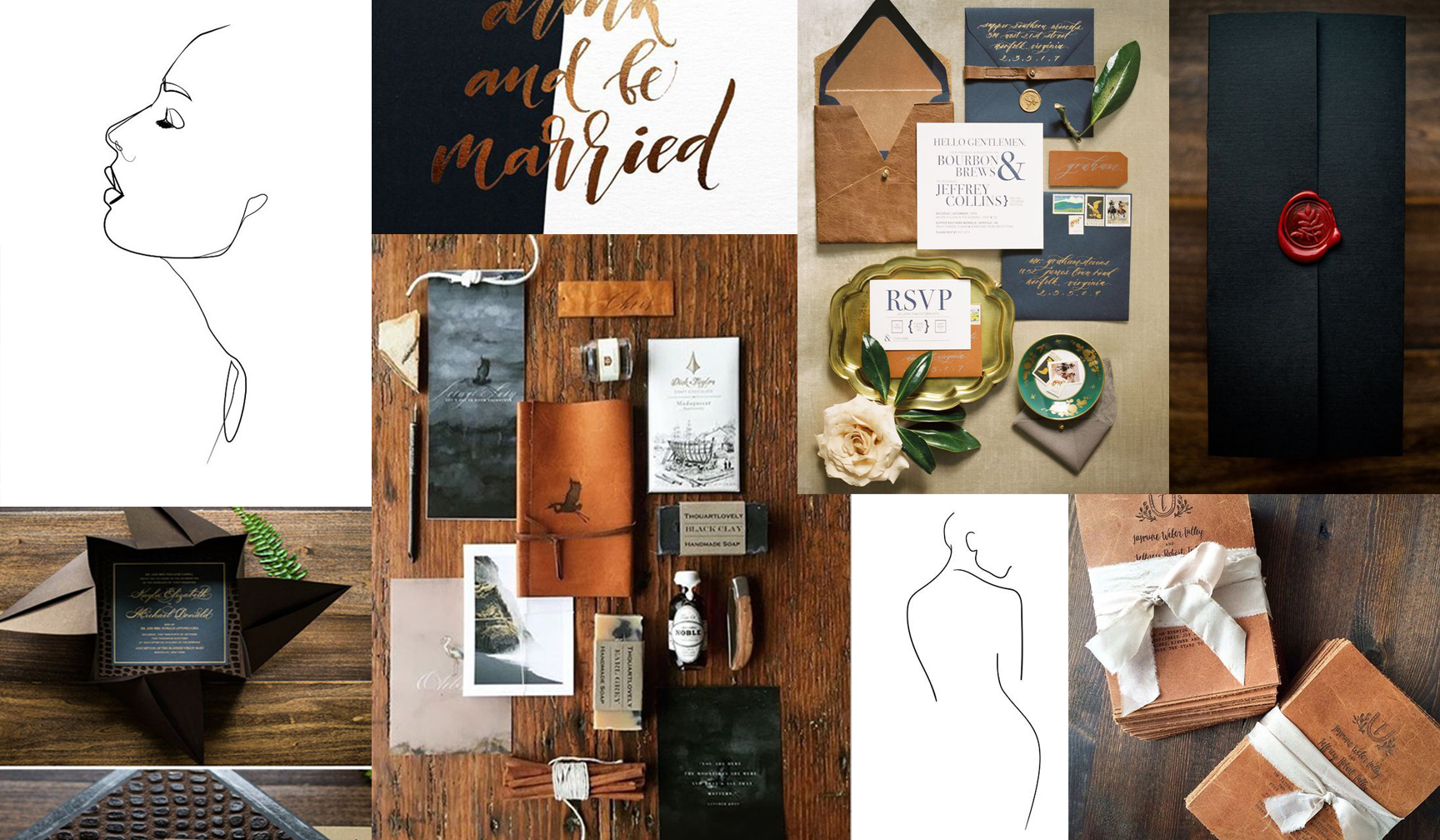 Sansa, on the other hand, doesn’t have as much of a struggle between good and evil – she has been through a lot of evil, and in my opinion, that experience has cemented her fully on the side of good. Her past has hardened her, but I think she remains soft and hopeful on the inside (see her friendship with Theon, her love of her family members, even her softening toward Tyrion and the Hound lately). I also see Sansa as the only true Lady (or Lord) of Winterfell, and cannot picture her being anywhere else. Her invitations would be wintery and soft with grays, blush and romantic details like silk ribbon or handmade paper. I also would LOVE to see a pop of fur in her invitations, like this fur backing shown from the amazing Emily Baird Design, or a fur-lined envelope.

To finish out the Starks (I hate Bran, soooo…) we’ve got an inspiration board for Jon Snow! I think Jon’s a guy who believes in tradition and would like his invitations to be formal, yet simple. Castle Black is really where he’s most at home throughout the series, and where he came into his own as a leader, so I think he’d like to keep things dark and elegant. I added a couple pops of red to signify the new information that he’s really a Targaryen as well as a Stark – that fire has always been there for him, but not as prevalent.

Probably gonna catch a little flack for this one, but I view Dany as blue fire, not red fire. She’s got a cool presence as well as a cool look, and frankly there’s very little warmth about her. Every move is calculated and she can be a little harsh – plus blue fire is actually hotter than red! I would love to include small fiery elements in her suite though, with a pop of orange/red envelopes, and some dragonglass looks like these slate table numbers and place cards. I would also finish off her suite with a reeallly drippy gold wax seal, because I believe her brother’s death really signified the beginning of her story arc!

Welp, it might be too soon here for all of us, so feel free to skip through or take a moment here if you need to! I am a total sucker for Missandei and Grey Worm and I couldn’t resist giving them the soft, beachy wedding that they deserve (SCREW YOU, MOUNTAIN). I think they both have fire and power, but only when they need to for the good of their people, and that they’re both kind, quiet souls when it comes down to it. Missandei loves to rock the neutral outfits, and just wants to be home in Naath on the beach with Gray Worm. I also learned in researching for this post that Naath is called the Isle of the Butterflies, so you know there’d be a subtle butterfly reference in there! RIP Missandei, you are so loved and missed!

In keeping with the beachy theme, I’d like to include the Greyjoys – I don’t know that Theon or Yara would ever get married, but I love the entire premise of the Greyjoy family. They’re rough and sharp and don’t really care about much but each other and they have a deep, dark connection to the sea in the Iron Islands. We’d keep things black, gray, and deep sea-green with some sharp edges, and potentially some dark metal details made of iron! This envelope liner with the painted squid is a great representation of their Sigil!

And I had to include the Sand Snakes as the only real desert dwellers in the series. I love how feisty and tough these ladies are, and that they are warriors as well as caring, loving, women and sexual beings. Their fashion is always on point, and they seem to respect the natural elements around them. I would include so many natural textures like cotton, linen, and leather into their suite, and use those warm colors that I love so much – of course with pops of yellow! The Sand Snakes seem a little more modern in thought than many in Westeros, as well as kind of “trendy” so these suites would have less of an traditional feel as evidenced by rounder sans serif fonts and sharp color-blocking.

I realize she’s long gone, but Margaery is our only “girly”, flower child character throughout the series (okay, maybe Myrcella, but we know Margaery better) so I wanted to design something for her. Highgarden is known for growth and agriculture, and Margaery demonstrates that so well with her warm, cheery presence – not to diminish her intelligence and cunning, of course. I know Margaery would be on board with the recent trend of pressed flower wedding invitations, and we’d use a lot of sage green and cotton papers to signify growth as well as match the Tyrell Sigil.

On the opposite end of the spectrum, we’ve got the Evil Queen herself, Cersei Lannister. As crazy as she is, Cersei’s outfits have been ON POINT lately, amirite? The velvet, deep reds and blacks, and sharp lines are full of opulence, power, and control, just like Cersei herself. I would bring these same elements into her wedding invitations, with deep reds and golds for House Lannister (there’d definitely be a lion crest somewhere!), black accents, and stark, rich elements like marble and metal – plus, if she’s marrying Jaime, it’s only fitting to include an actual block of gold, right? Cersei wants the world to know she’s more elegant, more rich, and more powerful than you, so that’s what her invitations would need to say!

It’s a similar color scheme, but a totally different vibe for the red woman. She’s all about warmth and light, to celebrate her God, the Lord of Light. We’d include geometric details to match her famed necklace, and all red everything otherwise. I like the idea of using acrylic as the light would literally shine through it. She also would definitely have a kickass light installation at her wedding!

She’s my favorite character now that Jorah is gone, so I had to do her justice. The immediate feeling about Brienne is that she’s tough and somewhat androgynous (although maybe not after her relationship with Jaime this season), but I think she’s so much more than that. She values loyalty, goodness, and tradition. She stands up for anything she believes in, and isn’t afraid of a fight. She’s also hopeful, even though she tries to mask that with a tough exterior, and extremely open to love if you break through that – and earn it (Pod, Sansa, Jaime…). I think she’d have very classic, traditional, invitations. Letterpress or engraving definitely, something like Spencerian script, and maybe a small hint of that tough exterior with a leather cord wrap.

I was so upset about him and Brienne not getting together, but actually this exercise helped me to see that it’s not the right fit at all! In terms of different styles of couples, I see Tormund as your “boho, wild-child, hippie bride” to some extent – does what he wants, loves adventure, a little silly and dramatic, and loves to be the center of attention. I think he’d love a little color, earthy elements like feathers, rope, or fur, and some foggy mountain imagery fitting for a wildling. The wording would follow our Adventure Awaits suite, for sure, as this is how Tormund tackles everything in his life! Plus we had to include a bear element, because, well…….you know about Tormund and the bear.

Gilly and Sam are the soft, sweet, warm couple of Game of Thrones. They’re basically the only couple that’s just solid and simple, a parallel to Missandei and Grey Worm but who’ve managed to stay out of most of the drama since finding each other. Gilly is named after Gillyweed, which is a relative of the Carnation flower, so I’d include a vintage carnation envelope liner, and an antique-d invitation with elements of old storybooks that have played such an important role for Gilly and Sam.

And of course, I had to include The Night King himself – because what could be cooler than invitations for the physical embodiment of death?! This is probably not what your typical invitation designer gets excited about….

At first, I was going in the direction of black and darkness, but The Night King actually wants to bring wintery white nothingness to the entire world, and I love that look better for him. He’s basically made of ice, so it only makes sense that his invitations would be white on white, a blind letterpress or white foil on white stock or vellum for instance – or even clear acrylic with white printing. He’d want sharp lines – maybe even jagged edges – and potentially some gunmetal deep silver accents. Annnd no Night King suite could be complete without a creepy little pop or two of ice blue!

Alright, how freaking fun was that?

I basically had the best time researching and writing this post, so I hope you all loved it too! It’s so challenging and fun to think about how different elements of someone’s life and personality can come together and be represented through paper and design elements. Do you agree with our choices? Hate them? Which mood board is your favorite? Let us know in the comments below! I think Tormund and the Sand Snakes are most “me” in style, but Arya’s presented a challenge and some unique elements that would be really fun to put together so it’s a tie! And if any of you Westerosi need custom invitations, you should let us know via our Contact Form!